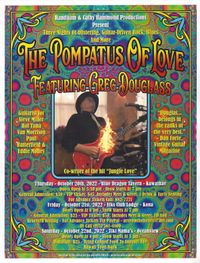 Greg Douglass...he who has played with some of the best artists in the world, including Steve Miller, Greg Kihn, Eddie Money, Paul Butterfield, Hot Tuna, the Electric Flag; has now settled down with three of the greatest players in California; long-time pal Hector Toro on drums & vocals; vocalist/rhythm guitarist Jesus Guillermoprieto and the astonishing bass stylings (solid body electric and stand-up bass) of J.D. Pinckney, J.D. also builds all his own instruments. It's a jaw-dropping combination of the greatest rock'n'roll music from the past fifty years, including music from Greg's guitar heroes like Jeff Beck, Eric Clapton, Sonny Landreth, Mike Bloomfield, plus his multi-million selling hit single "Jungle Love" by Steve Miller. It's fifty years of recording and touring with the best players in the world and Greg has finally found a band great enough to play it all astonishingly well. If you've listened to classic rock radio during the last few decades, you've heard Greg play (remember that cool guitar solo on Greg Kihn's "Jeopardy"?) and now you get to hear him joyously rip through music he's been dying to play for years. He just had to find the right guys to play it perfectly. Greg just returned from England and now he's ready to give fans of great electric guitar music a real treat while the palm trees sway and you get a rare chance to hear the killer sounds you grew up with, whether you're 21 or 80. You've heard Greg play on the radio a hundred times; now watch him and his world class band bring The Real Deal to paradise.. You deserve it! Doors open at 4:00 pm-Show starts at 5:00 pm . General admission: $25-VIP Ticket: $50 Includes Meet & Greet, CD and Reserved Seating.. See PayPal information below or Call (917) 561-4800 Donation: $25- Bring Canned Food to Support the Hawaii Food Bank