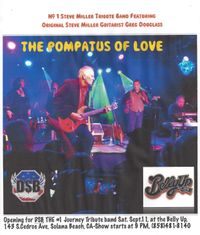 This Saturday is going to be an epic show at the Belly Up! Two top tribute bands will be doing an astonishing double bill! The headliners are DSB, the #1 Journey tribute band. They've got the DNA to prove it: Miles Schon, Neal Schon's son and a smoking guitar player in his own right has obviously got the licks 100% right. He was born with talent in his blood, surrounded by great guitar work during his entire existence! Opening the show there's THE POMPATUS OF LOVE, featuring Greg Douglass, the guitarist with Steve's band during their musical and commercial peak during the late Seventies/early Eighties. Greg Douglass co-wrote the hit "Jungle Love" for the "Book of Dreams" LP. It later ended up on the Miller Greatest Hits album, which is one of the top-selling rock compilations of all time. Doors open at 8:00 PM, the Pompatus of Love rocks the stage at 9:00PM and , following their one hour set, DSB ("Don't Stop Believing"...get it?) ups the energy level. I've seen their videos; amazing band. And the Pompatus LOVES setting the Belly Up on fire every time we play there. See ya Saturday!