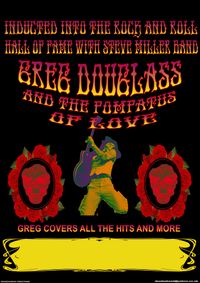 Original Steve Miller guitarist Greg Douglass ,co-author of the hit song "Jungle Love"is featured in this...well, it's not REALLY a tribute band with Greg in there. The other members of the UK contingent of The Pompatus of Love are: Rob Beckinsale on vocals, guitar & keyboards, Matt Wheatley, drums, and Steve Browning on bass. These guys are monster players and Greg, having been recently inducted into the Rock and Roll Hall of Fame and owning four platinum records representing about 20 million sales, is at the top of his game at the ripe old age of 72. It's going to be a hell of a show. Tickets are available online from the link below .