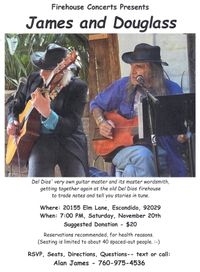 It's been eons since the Del Dios Dangerous Duo, the space where Folk meets Funk, has last appeared at the Del Dios Firehouse/Community Center and Brillig and Slithy Toves are going slay the frumious Bandersnatch this time for sure...O frabjous day! Callooh! Callay! (Thanks to Lewis Carroll.) This means that you will be basking in the wonder of Alan James's astonishing lyrics and his deep, throbbing mellifluous voice. Greg will be playing some solo acoustic AND acoustic tunes. Vintage Guitar magazine ranked Mr. D as one of the best slide guitarists around. Despite his advanced aged, he is in fine form and just returned from 2 sold out shows in Greece and Kona. Want to buy tickets in advance? Go to www.gregdouglassguitar.com and go to shows. There will be a link to PayPal. Go to gregdouglassguitar.com when you get to PayPal and for a mere twenty dollars a ticket, you're in. Start time is 7:00 but it is suggested that you get there early so you can get the coolest seat in the house. It's going to be an evening of warmth and harmonic wonders. Alan and and Greg look forward to seeing you there!