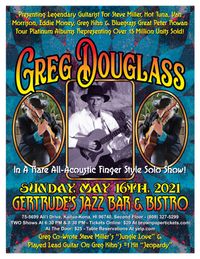 Greg has played numerous big corporate events on the Big Island, but NOTHING beats playing a more intimate bar/bistro setting. Greg will be doing two shows on the night of Sunday, May 16, 2021. The first show is at 6:30 PM. Greg is known mostly for his rock career (co-writer of Steve Miller's "Jungle Love", 15 million copies sold), guitarist for Greg Kihn for years, including playing the smoking guitar on the #1 hit "Jeopardy", recording /touring with Van Morrison, Eddie Money, Paul Butterfield , many other musical greats. On May 16th, you'll hear Greg's acoustic finger-style playing, which is just as high-energy as his electrified work. Hang out after the second show and ask those questions you always wanted to ask about being a touring musician. (Everything you've heard is true.) This show is a must-see and a must-hear.